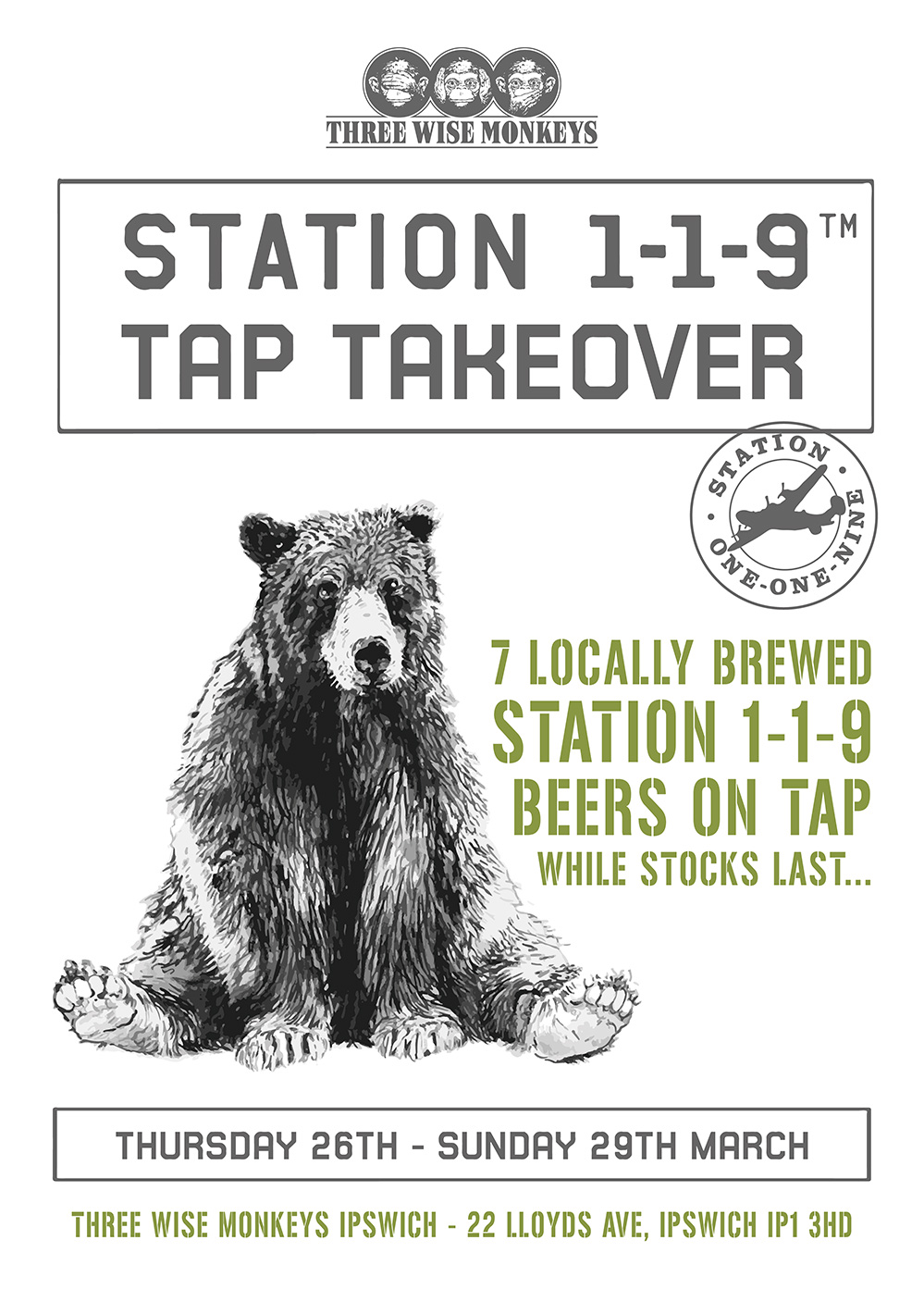 Back to all events

Unfortunately, this event has been cancelled in response to the COVID-19 crisis.
We will find a new date for the event to take place once we re-open.

The next Tap Takeover at Three Wise Monkeys Ipswich comes via Station 1-1-9 based just down the road in Eye.

Their modern hop focused beers take inspiration from the history of local USAF bases, using the punchy aromatic side of hops like Simcoe, Centennial, Cascade and Mosaic.


Session IPA 3.9%
All the characteristics of an IPA with plenty of Ekuanot hops – but with a low ABV. An up and coming hop with an indescribably unique berry and fresh pepper character.

Orange Wheat Beer 4.8%
Fresh and punchy, this wheat beer is made with real oranges and Cascade hops to give an orange-citrus bite to the smoothness of the wheat beer. Spice notes and refreshingly fruity, it’s simply gluggable.

Pale Ale 5%
Light coloured and hoppy, Cascade forms the backbone of flavours, adding its characteristic citrus notes, while a touch of Chinook gives a little spice to the finish.
Brewed to celebrate the heroic carrier pigeon, ‘G.I. Joe’, who saved the lives of a thousand soldiers. Radio equipment was down and the only means of communication fell to ‘G.I. Joe’. He flew 20 miles in 20 minutes and later received the Dickin medal for his bravery.

New England IPA 5.5%
Lots of oats and wheat create this super-hazy beer. Liberally hopped after the boil with Citra, Cascade and Chinook, making it explode with aroma and only a touch of bitterness.

Black IPA 6.7%
Dark and hoppy, with a deceivingly dry and light style. Centennial and Cascade, with a touch of Ekuanot to add complexity to the flavour.
Brewed to celebrate the exploits of ‘Roscoe’, the mascot of the 390th. The bear was donated by the residents of Montana to 390th Squadron. He became their mascot, was named ’Roscoe’, and came with them to Parham, Suffolk. When he wasn’t involved on missions, he would often stroll into Parham village to the astonishment of the parishioners.

Double IPA 8.5%
It’s all about Mosaic hops – named in honour of the artistic assortment of complex aromas and flavours. And double helpings too, balanced with a light and dry finish.